Firstly, have a flash fiction story written by your truly. And afterwards you'll find a bunch of links that'll give you dozens of free ebooks.

THE GOLDEN AGE OF TELEVISION

It was my wife who’d insisted we purchase our first television set. She’d explained how the Johnsons had one (those neighbors were always a step ahead of us all) and it brought their family closer.

Ruth’s comment was undoubtedly a reference to how our son had distanced himself since his older sister lost her life in a traffic accident. A year on and he had retreated into himself, only ever leaving the house for school. A teenager should be out socialising and, dare I say it, coming home with black eyes and heartaches. But not our Jimmy.

As a successful encyclopaedia salesman known throughout Chicago as Eddiepedia—while Ruth only ever called me Edward—I feared the advent of television would stunt society's desire to educate themselves. Regardless, I soon brought one home. When I first plugged it in under Ruth’s eager eye, Jimmy ventured from his bedroom into a lounge filled with the roar of static. He leaned against the doorframe watching me angle the antenna for the best picture.

From that moment television shows entertained us whenever we ate.

Despite sharing mealtimes with his mom and I rather than staying in his room, Jimmy shared little conversation. No matter that we each hunched on the sofa, all eyes on the small screen across the room, what mattered was that we were together, a family rebuilding our home using television as adhesive. Yet, regardless of what they say about time heals wounds, our daughter’s name hid on an averted glance or secret quivering lips. Sad how it becomes taboo to utter the name of a passed loved one. I would often catch the dark look on Ruth’s face, indeed an expression I recognised in the bathroom mirror when shaving.

With television a part of our lives, that was the way of it for several weeks. On the night everything truly went to hell, I came home to an aroma of roasting chicken. As always Jimmy sat in the lounge watching television, school bag at his feet.

He didn't acknowledge me. After heaping my briefcase and sample editions onto the dining table, I walked into the kitchen.

“Hey, honey.” I kissed the back of Ruth’s head as she sliced a carrot. “Seen my toolbox? It's not in the garage.”

“Station wagon has a headlamp out again,” I said, ignoring the question. “Loose connection I reckon. Now these newer models are without wooden panels, the wiring seems shot.”

The knife paused over the next carrot, her knuckles whitening. Whenever the car was mentioned she would cool. She had, after all, been the one driving when the accident happened and had ever since blamed herself for our daughter’s untimely death.

I went into the lounge where Adventures of Superman stole my attention, just as it had Jimmy’s, until steaming dinner trays landed quite literally on our laps.

Jimmy wore sleeves pulled down over his wrists and, with the summer heat raging even at night, this should have raised questions. Such is the way television reels us in, I did not think much of it. Perhaps had I voiced my observation things would have transpired differently.

After an evening of television, entirely forgetting the station wagon’s headlamp, we went to bed. Nothing unusual.

That is, until I needed a bathroom break in the early hours.

Returning toward our bedroom with shuffling feet and squinty eyes, I spotted a faint light beneath Jimmy’s door. It flickered white and blue.

In seconds I was pressing my ear against the cool wood. Faint yet unmistakable: Static, similar to when the television antenna needs adjusting. I twisted and pushed the handle in one movement. The door swung inward and stopped halfway to hit my upturned toolbox. Its contents littered the carpet, mingled with our entire collection of family photographs and glass shards from broken frames. Faint sparks leapt around and between everything.

He slumped in a shadowy corner, his stomach a raw hole of meaty folds and glistening pipes. Shards that reflected electricity protruded from all angles around the gaping mess.

My heart punched my throat, and my knees buckled.

Hidden earlier by sleeves, wires and electrical components were stitched into both his wrists, scabbed around the edges and weeping pus. The wounds connected trailing cables, sparking blue-white electricity powered by the unscrewed outlet across the room. My screwdriver and wrench were jammed behind the plate, with bare wires twisted around each tool.

I fought the urge to vomit.

The horrific exhibit wasn’t only my son’s dead eyes staring at the ceiling, his mouth slightly open, it was also the large framed photograph of our daughter.

Her delightful smile filled the picture taken on our vacation in the Rockies. Using that frame as a kind of screen, Jimmy had constructed a miniature imitation of a television set. The other frames, smeared with bloody fingerprints, were glued at imperfect angles to create the box itself, from which bulged more cables and wires, all crackling electricity.

My daughter’s eyes flickered red and her face pressed against the glass, features distorting. There was a crack… a shatter, and in a rush of darkness and glass fragments, her silhouette poured across the carpet like gasoline. Miniature lightning sparked at the epicentre and then it bulged, rising like a giant blister. Stretching, unmistakably my daughter’s figure, tall and proud. Only dark, as though laced with shadow.

It swept upwards, shrieking over my head in twists of darkness and electrical flashes. Broken glass winked and shards glinted.

Ruth emerged from our bedroom, fumbling the belt of her gown.

The billowing darkness, surely a demonic replica of our daughter rather than her spirit, corkscrewed down the hallway toward my wife.

Her scream cut short as her gown flapped and glass shredded her flesh. Blood spattered the walls.

She slumped, gurgling, then collapsed. Her body twitched as the shadow that was our daughter vanished.

I was left staring at Ruth’s gushing remains.

By the way, I'm thrilled to announce that the coverwrap to my Christmas chapbook has been approved by the publisher.
Thanks to all who've so far pre-ordered a signed copy! 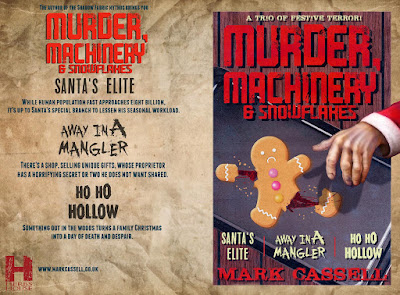 The Thrill of November

Art of the Arcane's SciFi Giveaway

Out of This World

Not free but I'm sharing this one :

Bump In the Night

As always, thanks for the attention!