With one novel on a publisher's desk and a new one in development, I'm now burying myself in research. Namely: clinical trials.

After the success of Monster Double Feature I'm revisiting a concept featured in one of the stories. Several reviewers mentioned how they'd love to read more of the fictional company CellCore from the cyber-horror tale "Reanimation Channel." As a result I've found my next book expanding their unethical pursuits...

So the novel I'm now attacking is a modern day tale blending medieval apparatus and cybertech, featuring a plot thread that leans a little on clinical trials.

My questions for you:

As promised with Parasite Crop, I'll give you a shout in the acknowledgements if any of your answers make it into the manuscript. 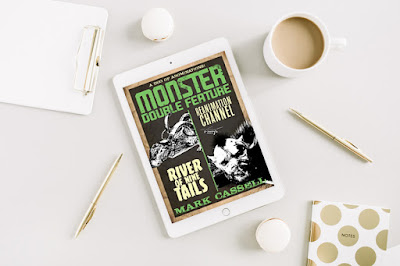 What the reviewers say about "Reanimation Channel"

"... is a gloriously over the top creature feature, mixing body horror, eco-horror (fight me it's there I see it), with dark, dark humour this is an expansive short story that will raise as many smiles as gasps of horror. I loved how this went from being a tight domestic horror to something much more. Cassell's ability to keep the escalation of events logical and believable, well as plausible as they can be in a story of this nature, shows an author with an assured and gifted sense of storytelling.

While the story itself is entirely self-contained, I'd love to read more about the dark web villains and their reanimation company."
- Ginger Nuts of Horror
"... is a cyber horror piece whose unusual monster is just as brutal as it is original."
- Melissa Maaser
"Cassell created a really unique ‘channel’ and I loved how it sucked the man into watching it and interacting with it, even when he knew better and knew he needed to call the police. The “thing” that is described in this story is utterly amazing and will make readers wish and hope for this creature to be featured elsewhere. As a first time reader of Cassell, I honestly can’t tell you if this is related to any of his other works, but I sure hope so. If not – MARK, GET ON IT!"
- Kendall Reviews
"... is a disturbingly original story, tense, ferocious, and engaging."
- P.J. Blakey-Novis
UK Amazon: https://amzn.to/3ikKVXo
US Amazon: https://amzn.to/2CWw70P
Canada Amazon: https://amzn.to/2NIQZus
Australia Amazon: https://amzn.to/2BgiOYJ

This is my new favourite review of "Reanimation Channel" in which a little more of the plot is revealed:
"Scott’s neighbour Adrian is nearly always at home. Which is good for Scott because it means any deliveries that turn up at his house whilst he’s out, will be taken in by Adrian.
It’s this simple task of collecting a parcel from a neighbour, which causes events to spiral out of control. The discovery of a dead body and a mysterious online game leads to an amalgam of flesh and blood that makes the end of Akira look like a lump of clay with some Lego jammed in its surface."
- Mark Green
Posted by Mark Cassell at 11:21