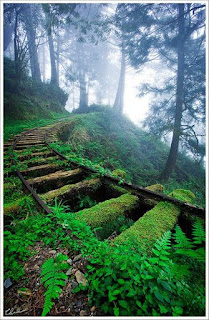 Note: Thanks to Miranda Kate for the nudge to write this flash fiction piece, inspired by the photo above (taken by Tien-Chien Chen). While I struggled for a title, Spotify answered via my headphones with Celldweller’s The Great Divide (from the 2017 album Offworld). Its definition: “The boundary between life and death.” So an extra thanks goes to Klayton for his timing.
THE GREAT DIVIDE
(750 words)
Something echoed up ahead: a rhythmic clank. Hannah eyed the mountainside trail. The overgrown path narrowed, replaced by railway tracks. Rows of wooden sleepers hid beneath moss and creeping foliage, their vibrancy glowing in spite of the mist that pressed in from the gorge beside her.
At 2000 metres above sea level, inhaling the sweet aroma of the mountain woodland, her head was indeed in the clouds. She slowed her pace to avoid tripping over the sleepers and rusted tracks. Ferns slapped her trousers.
The insistent – perhaps even frantic – clanking sounds made her picture someone with a hammer. She’d not seen anyone for a couple of hours, and a sense of vulnerability pushed down on her as thick as the surrounding clouds.
Clank.
It reminded her of a blacksmith portrayed in movies set in medieval times, where a topless man glistened with sweat, forging a sword. Or axe.
She was being silly. Why not think of him hammering a horse shoe?
The clanks stopped.
Wind howled. Yet the trees that reached into the mist remained still. A rumble made her come to a total standstill. A heaviness filled her gut. Perhaps it was an earthquake – yet it was a far off sound rather than a sensation beneath her feet.
She removed a drinking bottle from her rucksack, twisted the lid and gulped water. Some trickled down her chin. Although warm, it was refreshing. Wiping her mouth with the back of a hand, she listened intently. Nothing. The silence squeezed her. The mist thickened.
No more wind, no more rumbles.
No more imagination, dammit. Yet she had heard the clanking sounds. Most definitely. Taking a lungful of mountainside air, she put away the bottle and began walking again.
And again: clank … clank … clank …
Finally, as she rounded a curve of the railway as it cut alongside the mountain, she saw someone sitting between the rails, facing up the track. Their grey hair was cut short, making her unable to determine gender. Dressed in the familiar garments of the Taiwanese older generation – definitely the poorer end of society – they held a rock, bringing it up high and then crashing it down between their legs.
Clank.
“Hello?” She was about fifteen paces away.
They didn’t acknowledge her.
She came up beside them. It was a man, possibly in his late-fifties or early sixties. He sat with his legs spread wide. A stink of body odour and piss wafted from him. She recoiled but held her ground. He hammered at one of two chained manacles that bound his ankles to the rails that flanked him. His bare feet were slick with both congealed and fresh blood.
“Dear, God!”
Still he didn’t look up.
Clank … Clank.
“Let me help!”
The manacles reflected the green and white of their surroundings. Unfortunately it seemed his efforts had failed to even dent them.
He stopped hammering, his breaths rasping, and glared up at her. In rapid Taiwanese, he spoke. Having travelled through Asia, visiting countries such as Thailand, Vietnam, China, The Philippines, and now Taiwan, Hannah never got to learn much of any language. By the time she trod foreign soil, learning basic words so as not to come across as an ignorant Westerner, she’d set off for the next country.
The man snapped his mouth shut, his teeth clacking. He went back to smashing at the manacles.
“Please.” Hannah crouched beside him. “Let me help.”
Clank …
The rumbling started up, just as before. This time closer.
Clank …
Up ahead, the mist billowed. As though it breathed out, giving way to the silhouette of a narrow locomotive. Black smoke belched. It broke through the mist. Hannah lurched upright, stumbled backwards, and tripped over the rail. She crashed to the hard ground, her head smacking rock. She cried out. The train thundered towards them, phasing in and out of focus; a shimmering phantom, transparent and unreal. The trees and ferns remained eerily still, only the mist parting.
The man hammered at the manacles with desperation. Clank. Clank.
She tucked her legs away from the tracks, shrank against the rock, and screamed. Hot wind blasted into her face and whipped hair into her eyes as it hurtled past.
The clanks stopped and the locomotive vanished. Along with the man.
Silence.
With breath tight in her lungs, Hannah watched the mist drift along the rails. It teased the rusted manacles. And there, half-buried in the hardened earth, several bones, each pitted and yellowed, lay scattered between the sleepers.
(c)2019 Mark Cassell
______________________
Dear Reader,
If you liked the story, please share or leave a comment. Or both … Actually, if you didn’t like it then feel free to tell me why.
M.
#FLASHFICTION
Posted by Mark Cassell at 10:58