Posted by Mark Cassell at 19:05 No comments:

Posted by Mark Cassell at 14:10 No comments:

A Teaser for Halloween

Posted by Mark Cassell at 14:21 No comments: 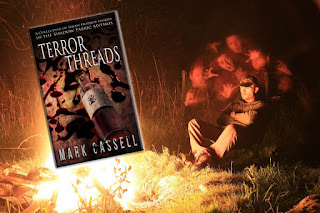 Here's a treat for you guys.

How about snatching up my next ebook for a SPECIAL pre-order price?
From now until 3rd November, Terror Threads is available exclusively on Amazon for only 99p (99c) - please click here. After that, the price will jump up ... so, this is your chance to save some pennies.
Here's the blurb:
TERROR THREADS
Ten standalone tales in the best-selling Shadow Fabric Mythos. Each story of ghosts, of demons, of the occult, weaves the mythos tighter and proves we all have the power to see in the dark. Both an introduction to the Shadow Fabric and a companion book, this collection of horror stories contains the following:

"Dust Devils"
- When a driving instructor's pupil fails to turn up for a lesson, he doesn't just drive off. He investigates ... things.

"A Story of Amber"
- Two brothers and a grandfather's secret. This is a story that begins in childhood and ends in adulthood.

"The Rebirth"
- A primary school teacher's lesson fails to go to plan when a peculiar Easter egg lands in her possession.

"Dead Lines"
- An artist learns she is not the only one holding the brush.

"Pile of Dirt"
- After a serious accident, all you want to do is relax in your garden. But the mysterious pile of dirt that has appeared on your lawn bugs the hell out of you.

"The Commission"
- A photographer's commission proves to be a pain in the neck.

"Diagonal Dead"
- It's a shame the dead can't stay dead, especially those who are discovered in a wall cavity.

"Demon Alcohol"
- Staying at a bed and breakfast in a quaint harbour town, Tammy is not in the mood for uninvited guests. Especially when she's hungover and the guests are demons.

"A Sunset Companion"
- The low October sun can cause road accidents by blinding drivers ... but perhaps there are other causes in the surrounding woodland.

Most of the stories featured in this collection have been previously published in anthologies.
Grab Terror Threads at the special pre-order price.
Click HERE to be taken to your country's Amazon page. 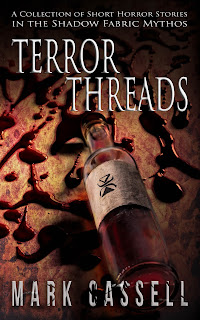 What the reviewers say about some of the stories:

"When a driving instructor went to pick up his last learner, he did not expect to get involved in a mystical monster attack. Having read other work by this author I was not disappointed with the story. An ancient monster, a deranged man and bloody death scenes, all things that I love..." - Amazon reviewer

"Brothers Chuck and Dillion were farm kids who experienced an unexplainable freakish event in their fields one Halloween. They are all grown up now and have unfortunately drifted apart. You've heard of gemstones having healing properties, well, what if the opposite was true... Oh that antagonistic Amber, a beauty to be wary of as it unifies and evades.

So damn unique, I had NO idea what was going on here I just knew that I was digging it.

Mark is a very highly regarded indie author with quite a few highly regarded works out there. I have only read two short stories of his, so far, but I can totally see why. His writing is like alternate (yet not bizarro) dimension kind of stuff, multi layered with precise attention to detail. I really need to check out more from him. His Shadow Fabric Mythos series is....yep, you guessed it, very highly regarded." - Goodreads review

"A wooden egg and a nasty surprise. I like how throughout you are following Kelly as she tries to rescue one of her students. The descriptive style makes you feel as you are walking Kelly's steps. Whilst this is not graphic it has that creepy feel to it and will make your imagination work overtime." - Amazon reviewer
Grab Terror Threads at the special pre-order price!
Click HERE to be taken to your country's Amazon page.
Thanks!
M. 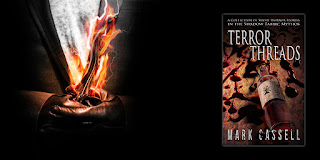 Posted by Mark Cassell at 17:55 No comments:

A cake, a car crash, and a pre-order discount for you guys

Posted by Mark Cassell at 17:38 No comments: