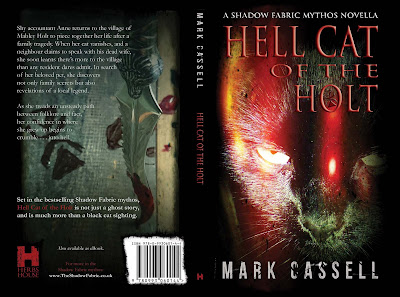 
Hell Cat of the Holt has been out for just over two weeks, and has already received no less than ten 5* reviews across Amazon UK and US.
"...great instalment so far to a dark and imaginative world held together by the malevolent Shadow Fabric."
"... a story that is rich in characterization as well as in action..."
So, people are saying some nice stuff about my book. And the paperback version has just hit the shelves! Grab it from Amazon US or Amazon UK.
Here's the blurb:
Shy accountant Anne returns to the village of Mabley Holt to piece together her life after a family tragedy. When her cat vanishes, and a neighbour claims to speak with his dead wife, she soon learns there’s more to the village than any resident dares admit. In search of her beloved pet, she discovers not only family secrets but also revelations of a local legend.As she treads an unsteady path between folklore and fact, her confidence in where she grew up begins to crumble ... Into hell.Set in the bestselling Shadow Fabric mythos, Hell Cat of the Holt is not just a ghost story, and is much more than a black cat sighting.
Grab the eBook or the paperback from:
Amazon UK : http://amzn.to/2ruB1ux
Amazon US : http://amzn.to/2rJvqO5
Enjoy.
~M.

Mark Cassell lives in a rural part of the UK where he often dreams of dystopian futures, peculiar creatures, and flitting shadows. Primarily a horror writer, his steampunk, dark fantasy, and SF stories have featured in several anthologies and ezines. His best-selling debut novel THE SHADOW FABRIC is closely followed by the popular short story collection SINISTER STITCHES and are both only a fraction of an expanding mythos of demons, devices, and deceit. Mark’s 2017 release HELL CAT OF THE HOLT further explores the Shadow Fabric mythos with ghosts and black cat legends.

For one of Mark’s FREE stories go to: www.markcassell.com

Or visit the website: www.theshadowfabric.co.uk
Posted by Mark Cassell at 17:42