Here's a slice of flash fiction for the Horror Bites Challenge inspired by the image below. For this one, Laura of Office Mango (the lady behind these challenges) asks: "Bring me your gardening tales of darkness and death".

Darkness? Death? That will not be a problem. 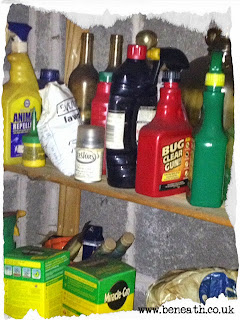 
A pool of grey muck leaked from the hessian sack. The smell of animal, of wet fur, forced Gerald backwards. His elbow smacked the shed door. The hinges creaked and an evening sunshine lanced the gloom.

“What—” His voice came from a tight throat. He crouched beside the sack.
Something shifted inside, something heavy. Gerald jerked away and his foot slid in the filth. He crashed into a rack. Tins of nails, nuts and bolts, and a box of metal brackets rained down and clattered across the floor. He grabbed his head, clenching his teeth. From a throbbing scalp his fingers came away sticky.
The top of the sack gaped like a crooked mouth.
Gerald’s heartbeat thundered into the silence.
A clawed hand shot from the sack and jagged fingernails shredded the fabric. In a splash of filth, a bulk of mottled flesh, slick and glistening, flopped out. Fleshy limbs with bony joints and covered in bristles, extended and slurped. One hand slapped the floor, fingers curling.
That filth spattered Gerald’s face and covered his lips. Bitter. He spat. His legs shook, his stomach churning; his breath came in short and sharp.
The creature stood upright and raised a bulbous head that almost touched the ceiling. Floppy appendages—were they ears?—clung to either side of a stubby snout. Clumsy, blunt teeth chattered between wet lips. Yellow bug-like eyes leaked as though crying not tears but pus. Raw blisters seethed over every inch of its grey flesh, and slime dripped from its immense torso like the thing sweated the damn stuff.
Seeming to ignore Gerald, this abomination reached towards a shelf and snatched a bottle of plant food. Plastic cracked as it tore off the cap. Knocking back its head, mouth wide, it guzzled the contents. White liquid dribbled over quivering lips and a forked-tongue. The empty bottle thumped the floor.
Gerald’s legs and arms failed him, shock and terror rooting him to the floor.
It grabbed another bottle from the shelf, this time animal repellent. And this, too, it downed. Next was a bottle of weed-killer, and then white spirit.
The spreading muck, now churning with spilled chemicals, soaked Gerald’s clothes.
Finally, the creature’s yellow eyes focused on him and squinted at his wounded scalp. Its roar filled the confines of the shed, deafening. Then it pounced.
Those blunt teeth clamped his skull and…
Pain. Darkness.
Nothing. 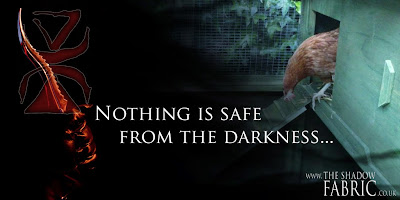 His debut novel, The Shadow Fabric, is a supernatural story and is available from all bookshops and online, including Amazon.