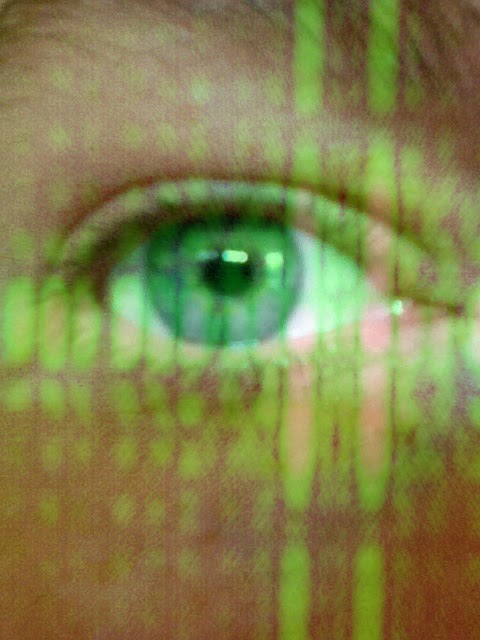 As a house writer for the Future Chronicles zine, I've been throwing together several ideas for the next installment of the Chaos Halo series. When Laura from Office Mango posted another Horror Bite challenge, I could not disengage from my Sci-Fi world.

The flash fiction story that follows is a taster of the Chaos Halo series, featuring Abigale (aka - Alpha Beta Gamma Kill). Read the first story in the series on a previous blog post or visit the Future Chronicles website.

For those who are unfamiliar with the challenge: write a bite of flash fiction (200-350 words) inspired by an image (see right, and yes, I admit I adapted it for the Sci-Fi element). More info about the challenge can be found on Laura's blog. All she asks is: "Try to scare me, or at the very least create a little bit of darkness".

Well, Laura, have a bit of dark science fiction...

She stamped on the eyeball and it popped. White gunk and circuitry splayed across the pavement.

“See,” Abigale said, “cybernetic.”
Quiver leaned against the wall. He scratched his beard. “You have issues.”
At their feet lay a man’s body, a man who’d tried to blend in with the crowd of starving citizens—and failed. His face was a red mess where Abigale had thrust her blade into an eye socket. “My Halo shows me things.”
“He’s definitely one of the mutrient thieves?”
Abigale nodded and crouched, leather creaking. She speared her finger into the gaping hole and it squelched.
“Somewhere in here,” she said, “will be the transmitter.”
“He’s half-human...”
She gestured behind them. “He’s inhuman to allowed these people to starve.”
Desperate citizens huddled in the shadows of derelict buildings. They watched Abigale probe deeper into the man’s head. Her finger brushed something and a series of glyphs flashed across her vision; the Halo confirming the transmitter. She hooked it out and blood flicked up her sleeve.
Quiver took the device and plugged it into the flesh-tech on his arm. With rapid keystrokes, he pinpointed the receiver.
“Close,” he said. “Two blocks south.”
Abigale stood and unstrapped Toothpick, her cannon. Its nozzles pointing downwards, she faced the crowd. “Follow us.”
They did, surprisingly silent.
And when Quiver led them round a final corner, he pointed at the rusted bulk of an eight-wheeled transport. "There."
Abigale lifted Toothpick and fired at the door. Metal shredded in flame and smoke.
Inside sat a man at a computer console, his heaviness spilling over a chair. Boxes of mutrient tablets surrounded him, each containing several thousand pills. He held a handful in front of his mouth, chewing. Wide eyes reflected the fire that trickled along the torn remains of the door.
He blinked.
Abigale and Quiver stepped back as the crowd rushed the vehicle. A pair of women, their clothes little more than rags, dragged the man down onto the pavement. One woman soon had his face clamped between bloody hands. The other tore out his eyes.
She ate them while he screamed.