There are few events that match the rush of holding your own book for the first time. All the hours of writing, editing and incorporating friendly suggestions and helpful hints into the final product are in your hands.

Yet this is just one step in a long process. Throughout the writing process, the author encounters wise advice about how completing the book is just the beginning of the adventure. Ahead lies marketing it and that process is just as time consuming and challenging as writing, the sages said. A few months out from the release of Humanity’s Saving Grace, published by Loose Cannon Press of Ottawa, I can only say they were absolutely right.

Unless you have a big publisher and or a brand name, the author is his or her own marketing director. The launch is a good start followed by signings at book stores and participating in large sales like the ones we have several times a year in Ottawa. You have to be prepared to talk up your book at any opportunity in case a potential customer is present. You need to have a couple of copies of the book with you all the time. Then comes looking for ways to talk about it to potential readers through the Internet. That’s no small task because of the thousands of books always coming on the market. It’s one that I certainly have to work on.

There are personal web pages and author pages where you can promote it. They all take time and finding a fresh angle. You have to listen to any suggestion for the book including the local artist who is considering it for a graphic novel. That’s something I wasn’t expecting.

Another aspect of marketing is reviews. In the past, I periodically wrote them for books, but it was never top of mind largely because there weren’t many places to post them. The Internet, especially social media, has changed that. Now I know about Goodreads.com and other review sites such as Amazon. And whenever someone says they finished my book, which I take as meaning they enjoyed it, I ask them to consider writing a review in hopes that enough positive comments will convince readers who have never heard of me to buy the book. Hopefully, they will enjoy it enough to tell their friends and write reviews. So reviews matter a lot.

Especially the ones that come out of the blue and clearly show how much the story clicked with the reader. Suggestions for a sequel have been very motivating even when it wasn’t part of my writing cycle plans. I do have four other novels in varying stages of development. However, an outline for a sequel set 30 years after Humanity’s Saving Grace is under development. And for those who’ve read the book, the Biot Genghis Khan plays a major role.

Humanity’s Saving Grace is a science fiction novel which isn’t nearly as big a genre as crime and mystery or romance and their many sub categories. That means I have a smaller pool of potential readers. So I try to appeal to their sense of curiosity. The story is really about humans admitting that climate change has so badly disrupted Earth that they really have no choice but to agree to aid an embattled alien species, which has the technology to reverse the environmental damage to our planet. As well, readers would probably enjoy meeting the Biobots, the biological robots that serve as helpers to the aliens and finding out why the Biobots convinced the aliens to seek Earth’s help. And the mysteries the humans encounter in space that will inspire some of them to a life of research and discovery.

While I don’t remember my first newspaper byline, the memory of seeing my book for the first time will always be with me. 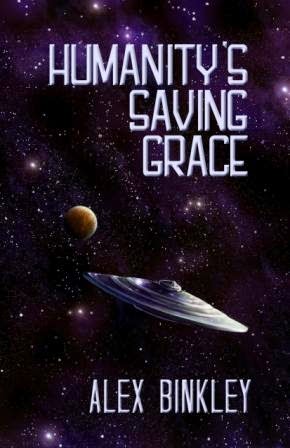 Alex Binkley is a freelance journalist in Ottawa and author of Humanity's Saving Grace, published in 2013. He has several other Science Fiction and Fantasy novels out in submissions or in progress.

You can find him on: