With The Shadow Fabric still being stitched, I'm into short stories again. Every day over the last few months, rising earlier than the sun, I've sweated at my desk. Whether to revise my novel, scribble notes, plot, write, polish, or critique other writers' work, I've been there with a mug of tea. I even found myself beta reading for Rayne Hall.

Being certain to do something with the craft every day has paid off, literally; suddenly my stories are being snatched up. And I'm excited.

Over the coming months, you'll see my tales feature in a number of publications.

As an addition to her successful Ten Tales fantasy and horror series, Rayne Hall is releasing another anthology, Dragon: Ten Tales of Fiery Beasts. My story "Alone with the Bones" will sit alongside nine others and is the first dragon tale I've attempted—which surprises even me, given that my first tattoo was of a dragon.

Another upcoming anthology is Hell's Garden: Mad, Bad, and Ghostly Gardeners. It's edited by April Grey of Damnation Books and includes six short stories. Mine, "Ten Minutes Till Deadtime", was a joy to write and I'd say it's one of my favourites. In particular, I enjoyed fleshing out the main character's downward spiral. 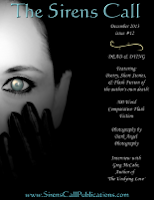 Later this month, the December edition (#12) of the Sirens Call eZine will feature my short story "Seeing is Believing". I have to admit this is the goriest tale I've written to date. They wanted submissions about my own death and that's what I gave them...with a slight twist. On acceptance one of the editors told me she got a kick out of the ending. Personally, what I've written is not a way I'd wish to die.


Since inception, this next project has been so much fun—and is ongoing. I have been commissioned by the guys at Future Chronicles to write a dark Sci-Fi series set to be a regular feature in their upcoming eZine of the same name.

Inspired by the photo here, I've developed The Chaos Halo Series. The first story, "Alpha Beta Gamma Kill", was written to introduce the series and will be found on their website when it's live.

Each edition of their eZine will include regular "Alpha Beta Gamma Kill" stories and the occasional stand-alone story in the world of the Chaos Halo.

A later blog will keep you informed, plus I'll update this post to include extra URL links.