The anthology, Dragon: Ten Tales of Fiery Beasts is published. Edited by Rayne Hall, it features short stories by regular contributors to the series as well as newbies. Like me. 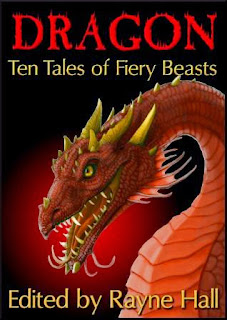 After completing a writing course tutored by Rayne, she approached me and explained there was a hole in her upcoming Ten Tales anthology; she had only nine stories and needed another. And she wanted it quick. Did I have any dragon stories? If not, would I like to write one?

No, I didn't have one, and yes, I'd love to. Needless to say, I was pretty damn chuffed that she asked me. Our fiction is of a similar nature; mostly with a dark core...

"Alone With the Bones", the first dragon story I've written, was drafted inside a week and polished for submission within a fortnight.

Not only was it my first dragon, but it was the fastest one, too.


The anthology is only available as an ebook. It doesn't matter if you don't have a Kindle or any other eReader, because you can download it in .pdf format and read it on your computer. So no one misses out!

Apple, Sony and other retailers will soon stock it.