New Species Discovered - It's a monster!

A new species of underwater cave dweller has been discovered in California.

Imagine it's midnight and you're snug in bed with winter pushing against your cozy home. Then the window explodes in a rush of glass and billowing curtains. A bitter wind stabs into your bedroom...and the chattering mandibles of this creature glisten in the frosty moonlight. Its bulk fills the window frame.

Claws tear at the walls, plaster and brick dust bursting as it clambers over the furniture. The smell of rot—like the time that salmon steak was off—fills your lungs.

Mud and slime drips from its limbs and it reaches for you.

Your screams aren't as loud as its roar... 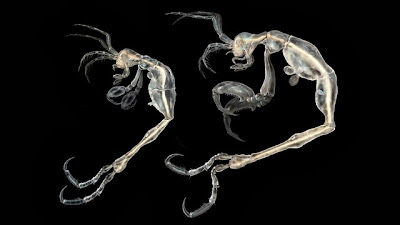 Yes, more procrastination but I see this as research while I develop The Chaos Halo Series for the upcoming Sci-Fi zine, Future Chronicles.

This new species has been named Liropus minusculus, highlighting the shrimp's minuscule size. So there's no need for worry, they won't be bursting through your bedroom window. Adult males measure only 3.3 millimetres and they live in a cave about 30 feet below the ocean surface on Isthmus Reef, a popular diving spot offshore of Catalina Island, California.

These things certainly remind me of the xenomorph from the Alien movies. Perhaps that's partly due to recently watching the entire franchise—also, yesterday, I was at a kid's birthday party and there was some Play-Doh in front of me.

Of course I had to make a face-sucker. 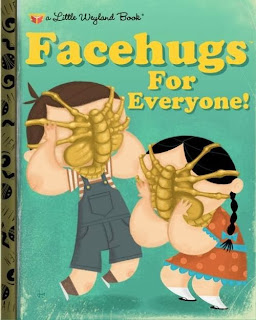 For more (serious) information about these evil-looking sea monkeys go to the LiveScience website.