After a break from The Shadow Fabric, I've been getting dirty with flash fiction and short stories—even had a couple accepted for upcoming anthologies, but that's another story... ha!

Halloween is with us and so I've written three flash fiction pieces. They're inspired by a few creepy photographs I found in the cellar of a forgotten cabin out in the woods. They were underneath the Necronomicon before I opened it and recited the words "Klaatu barada nikto." Actually, that's a lie, I of course found them on the internet. Where the hell else?

Demon in the Lake

At first, everyone at the school Halloween party stopped talking. They smiled and pointed, and some of the adults—all teachers—even laughed. The six children wore identical costumes. Their masks were simply boxes sporting pointy-eared and pointy-nosed faces, framed in clumps of lank hair. They had come as some kind of creature. Certainly the best costumes that night.
And of course, everyone thought their shotguns were toys… until they opened fire on the teachers.
Screams roared but weren’t as loud as the gunfire. Shells were spent and immediately reloaded. Those six children emptied their weapons over and over. They didn’t fire at the other children, it was only the teachers. Limbs vanished in red bursts, and hands, feet and heads popped like blisters. All but one teacher fell: the headmaster who cowered beneath a table. He thought it strange that none of the children screamed nor fled. It was only the adults who yelled, cried and backed away. Then he started to remember things… something about the lake? And a demon?
The roars echoed and died, and finally the shooting stopped. Cordite fogged the hall and swirled between the legs of the six children. The spent cartridges peppered the floor around them like red candy-wrappers. Bloody patterns streaked the floor in wet, glistening patches. Each of the teachers now a heaped mess of raw redness, crumpled and silent.
As one, the other children moved from the walls they’d pressed themselves against. They cheered and clapped.
When the sheriff arrived, and his deputies took away the six children, the headmaster emerged. Eventually he admitted those masks reminded him of something from fifty years ago. He still couldn’t place it: the lank hair, the sharp features, those freakish ears. That face… yes, that was it. He remembered the local legend: the Demon in the Lake. He remembered how he’d almost drowned. And the demon that had… rescued him?
As a child he’d attended this school. This had happened before. He, too, had applauded when his teachers were shot down. How could he have forgotten all this?
He did not feel like applauding now. 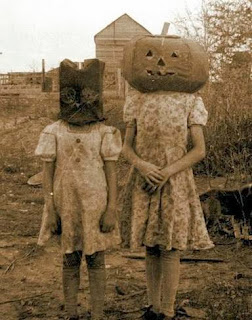 As sisters, Mary-Ann and I have always been close. Even though she’s always the first for everything, including Ma and Pa’s love. It’s never bothered me, I’ll always love her. We live with Grandpa too, but he doesn’t say much these days—not since Grandma died last year.
When Mary-Ann found Grandpa’s memoirs I told her not to read them, and when she used the paper to make her Halloween costume she said she’d hang me up with the scarecrow if I ever told. Her papier mache effort was much better than mine—I ended up settling for a not-so-scary paper bag over my head. She’d made a pumpkin mask, and it was amazing. Everyone said so and maybe even Grandpa smiled. It covered her whole head and looked like a real pumpkin. I couldn’t help thinking how Mary-Ann had slapped the glue over Grandpa’s handwriting.
One afternoon Mary-Ann sat in the pumpkin patch wearing it. I first thought she was looking for ideas on how to paint it. You know, to get the right colour and pattern and stuff, but it looked finished already.
Halloween was still weeks away, yet she always wore it. One evening I followed her out to the pumpkin patch and heard voices. She spoke with someone whose deep voice sounded a lot like Grandpa’s. As the sky darkened and the clouds removed the moonlight, I saw Grandma. The cold October air snatched from my throat. She wore that flowery dress of hers and didn’t look dead. She hovered above the ground. I wanted to run to her, to hug her, but the mud sucked at my feet.
Grandma leaned towards Mary-Ann and grasped her pumpkin head. Then my sister collapsed and Grandma vanished. The papier mache pumpkin rolled away and the moon returned.
Finally I tugged my feet free and ran over to it. I snatched it up, not even seeing if Mary-Ann was okay. I pulled the pumpkin over my own little head—it didn’t really fit—and I could smell Grandpa’s tobacco. I gagged and quickly yanked it off.
Mary-Ann was getting to her feet. She rubbed her head.
When we returned to the farmhouse hand in hand, the sound of Ma’s misery swept towards us. Pa sat on the rocking chair outside the front porch.
“Grandpa’s died,” he murmured. 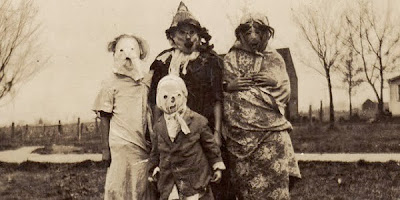 The seasons have been cruel and harvest poor, removing us from the Halloween fun. Other families have costumes. We didn’t, until Father came home with the sacks and those sheets. We were ecstatic. Mother scrubbed them best she could, then cut holes for the eyes and the nose, a slit for the mouth. One for each of us, her and Father included.
Mother always has great ideas.
I’m wearing mine now, with the stink crawling up my nose. I’m so excited. We all are.
Mother is the first to kill. She has an axe, and doesn’t stop hacking our neighbour’s neck until his head rolls. She’s off to the village now.
Father takes me out to the fields, to a hole he wants to show me. It’s deep and at the bottom are several rotted bodies.
“Where are their heads?” I ask.
Father shrugs and grabs his shovel.
Screams echo from the village: that’ll be Mother.
“Where else do you think I found the sacks, those sheets?” he says and swings the shovel at me.
It’s hard to see through my mask, but I manage to duck. I want to kill as well. This isn’t fair, so I run. I’m much faster than he is. Soon I find my sister’s head. It’s like she’s kissing the doorstep. Her body’s not far: it lays across the threshold in a red puddle that glistens. Again, that’ll be Mother’s handiwork.
Father bounds onto the porch and slips in the blood. He crashes into the door frame.
Look, there’s an axe. It’s not as big as Mother’s, but it should easily slice through Father’s neck.
When Mother did it, it looked fun. She always has great ideas.

Thanks for reading! If you liked these, you can find more flash fiction here.

Your comments are always appreciated.