How To Get Rid Of Wasps

This post has nothing to do with my novel, The Shadow Fabric, but you're here to learn how to deal with those annoying wasps, right?

Wasps. Yeah, they annoy us all. Something we cannot deny. Bees are cool, they won't sting unless we upset them - even then, for them, it's self-defense and suicide. Wasps, however, are evil; God's own winged demons put on Earth for one purpose only: to buzz around our heads and then sting the shit out of us.

Wave your hands around and they'll become agitated and probably sting you anyway. Also, quite possibly, they may just go and get their friends, and they'll all come and sting you!

There is a simple fix, and it works. I have no idea how, but it does. Honestly. 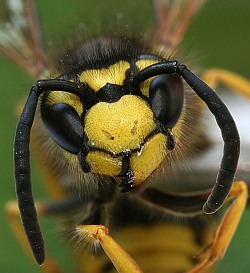 So, how do you get rid of wasps?


When they're near you, click your fingers repeatedly. It messes with their radar or something, and they'll bugger off. It works, I promise... Not only that, but you'll look as though you're jiving to a beat only you can hear.

It is as simple as that. 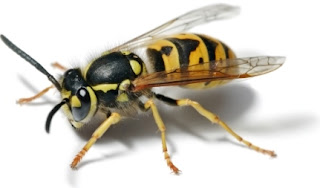 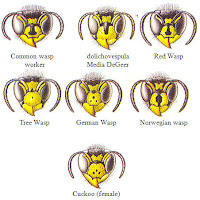 Finally, one last fact: The various species of wasps fall into one of two main categories: solitary wasps and social wasps. Adult solitary wasps live and operate alone, and most do not construct nests, yet all are fertile. By contrast, social wasps live in colonies (numbering in excess of several thousand) and build nests, yet not all of the colony can reproduce. In some species, it's only the wasp queen and male wasps that can mate, whilst the majority of the colony consists of sterile female workers.

And remember, it's all about finger-clicking. Have fun!