Okay, so this is a recipe blog post! Yeah, I know, but here it is: the other night I hit the kitchen and made it up as I went along (which often happens when beginning a project. Writing and DIY included).

The food went down well with my vegan friend. I'm not vegan, nor is my wife, but I like to know precisely what I'm eating, and often make dinners from scratch; besides, I enjoy cooking. 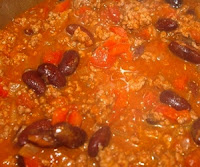 The recipe is high in protein, so not only is it suitable for your vegetarian and vegan friends, it's especially great if you want to lose weight, or indeed if you're a keen gym-goer like I am. Eating lean meat is one thing, but eating something as low in fat as this always wins for me.

I must add that mixing the Marmite in the hot water when making the soya mince is crucial to make anyone question whether this dish is actually meat-free. Try it, you'll be surprised when you taste it.

In a large pan on a high heat, pour in the oil. Chop up the onions (finely if you don't have a blender) and fry till brown. Crush the garlic, and add that in. Give it a few stirs, and then if you're using a blender, scoop it out and blend it.

Boil the water and dollop the Marmite in – make sure it's melted, and then mix with the dried soya (the Marmite is crucial, as I've already mentioned). Set it aside to let the Marmite fuse with the otherwise-bland soya, and get on with the next bit.

Back to the pan: add the tinned tomatoes with the onion and garlic mix. Turn it down to a medium heat.

Drain the kidney beans and the borlotti beans, and add these to the pan.

Stir in the salt, pepper, and the other powders... Giving it a massive stir.

Now add the soya mince, and give it another long stir. And another, just for good measure.

Cover and simmer on a low heat for 1 hour, stirring occasionally.