Today's post goes in hand with one from October: 'Can there be a Happy Meal for everyone?'. Both began as scribbles during my travels in 2008, and what follows here is from my visit to Cambodia.

Stepping into this country immediately changed me forever... 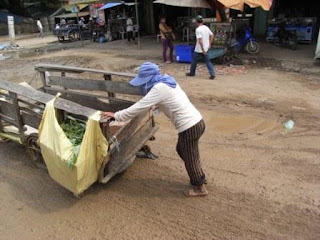 With barefoot Cambodians struggling as they push splintered-wheeled carts through turbid puddles, I stood there – feeling both dry and guilty – hailing a taxi. Pulling up, the driver eyed grey clouds over distant hills. Tucking my passport away and loading my rucksack into the boot, wedging that trusty bag alongside his belongings, I sank into the passenger seat and buckled in. My view, then, was through a broken windscreen; improvised surgery in way of a chunk of ordinary glass simply glued over the crack.

Grinding the car into gear, we were off along an incredible road, and it was my understanding that this was a commerce route between Thailand and Cambodia. The many trucks gave evidence to this. Leaving Poipet itself and the way was occasionally paved, though soon became nothing more than a dirt track. As sudden as that: from hard surface to soft, as wide as our Western roads… that was where the similarity ended.

The drivers kept – mostly – to the right, appearing to follow invisible lines and their own laws, driving on whichever side they feel like at the time; and with such an uneven surface I made a mental note never again to complain about the condition of the roads back home.

Soon it began to rain, the ground rapidly turning to deep mud. Scooters, cars, trucks and even 4x4s struggling to find traction, everyone's back-end swinging out; dangerously to and fro.

Once the clouds had succeeded in drenching the way before us, they parted for blue sky. With sunshine to brighten the flooded landscape, we carried on.

The sun-drenched scenery eventually opened onto a stretch of heart-wrenching sights. I saw a girl wearing a pretty dress sitting astride an adult’s bicycle, stroking a doll's hair whose arm was missing. The girl smiled, her head following our car as we slowly bounced past.

The cattle looked ill, their bones pushing against taut hide, tethered to trees at the side of that road. There were no intersections, nor road markings and certainly no need for any traffic lights. It was not really a road, yet still the hulks of trucks thundered along, cutting trenches into the mud. There was an occasional road sign in the form of a detour marker, taking us around a semi-constructed bridge. 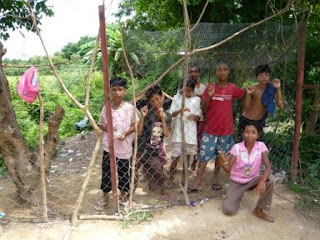 There were many more children playing. One, on his own and holding a stick, in what I could only assume to be his garden, his house a corrugated shelter and its entrance open to the elements. He was sword-fighting, leaping and turning; defending an attack only he could see.

Further along, there were more children: one watched as the other pushed a toy truck through mud they both sat in. They were barefooted, with the illusion of wearing thick brown socks.

A mother sat on a pile of broken concrete, her clothes a dull brightness against the backdrop of her laundry and a doorway into a cold gloom. At her feet, her daughter gently knocked together a couple of pebbles. It was impossible, due to both distance and the taxi's roaring engine, but I fancied that I heard the clash of those stones. We lurched on by, rattling along the road that was not a road. With the girl out of sight, I could still hear the silent sound of those small rocks held in equally small fists, clacking together.

Next we passed a school, with a dozen children running about; a dog leaping at their feet wagging its tail. My attention was held by a young boy of about ten years. He was in a wheelchair. He had no legs, just an emptiness below the blue shorts he wore. His only arm pointing at the dog. There was no sign of his other arm: nothing visible inside a baggy t-shirt sleeve.

According to the leaflet crumpled in my clammy palm, Cambodia is the most densely mined country in the world. Even though the reign of the Khmer Rouge ended thirty years ago there remains up to eight million landmines in the countryside. There are fifty thousand amputees, and a further two thousand mine victims accounted for every year.

I looked across the charming landscape and wondered how many rusted, quietly lethal demons were out there, just in that one direction, mere centimetres beneath the surface…

One generation later and I saw a child laughing, pointing at a dog as it ran between the legs of his peers. Feet and legs he will never feel again. He was happy. I read such gaiety in his eyes during those few seconds. He was laughing, enthused at the dog’s behaviour.

I left him though he does not – and will never – leave me.

It was the Kite Children I saw next: two of them, again barefooted and jogging together in the dirt. Both boys held crudely crafted kites of sticks and stretched plastic, string trailing behind them. They weren’t flying them, however their faces radiated a delightful glow.

I wondered who it was that made those kites for them. Have they ever – would they ever – play with a computer games console, or toys and merchandise from their favourite film viewed in a cinema complex just round the block? An edge of their world out of my periphery. For these children there is a world out of sight, and one which they will never see. This is their world; their life.

My eyes welled up at that moment, as I stared at those kites grasped in tiny hands. We drove on; my vision blurred. 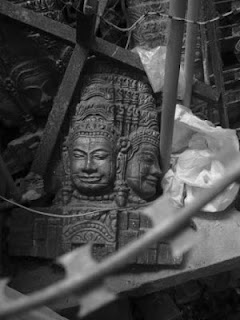 On arrival at the hotel in Siem Reap and with my belongings beside me, it was a welcome relief from being shaken… and stirred.

There were other things that I witnessed, such as the trucks with absurdly coloured wheel-nuts. I saw a scooter carrying a scooter, tied to the back like it was shopping. I wish to mention my taxi, with tyres spinning arcs of thick sludge, as it manoeuvred around an over-turned truck; its cargo strewn across the road, with the driver sitting on a shattered crate, expressionless.

There are other sights I could mention, but they fail to come into the light, because on that journey I saw so many children who weren't flying their kites.

The Next Big Thing

The Next Big Thing is a publicity program for authors. Essentially, the task is that we must answer ten questions about a work in progress, and then hand the same assignment to another five writers in the same, or similar, genre.

Mark Brandon Allen, author of Imagine Fantasy Science Fiction asked if I’d be interested in participating in this web ring. Mark, himself, was approached by Jace Daniel whose novel Under Angels is an Amazon bestseller.  I'm pleased to say Jace is a fellow horror writer.

The ten questions? Here I go then:

The Shadow Fabric. (Read the prologue).

The title I’ve had knocking about for something like 20 years, but it began just over a year ago when I grabbed a notebook to scribble down a few word associations. Naturally, shadows and darkness was first, which led to reanimating the dead, and then to witchcraft. Ah, and also the Great Fire of London came up, too.

Once I’d jotted down a few plot ideas and created a couple of characters, the story began to unravel itself... like a roll of fabric. Throwing together a few random scenes, I soon came up with the first several chapters. Looking at my notes now, I can see how the story developed. And it’s quite amazing the little doodles I've found which strangely inspired me.

Balancing full-time work, the gym and general living, it's tough to get anything substantial written, but on most mornings I kick myself out of bed at 5 a.m. just to get something creative down (see Take the time blog post).

During the inception of The Shadow Fabric and once I'd compiled my scenes, sketching the plot took around a month. Actually writing the first draft? That was about six months... The hard part is always the editing – that’s where I am now.

It’s a supernatural horror novel of sins, shadows and the reanimated dead – a story digging up a previously unknown history of witchcraft, and the true cause of the Great Fire of London. 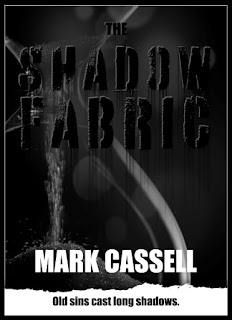 There was never one specific moment, nor was there anyone in particular to inspire me. Having had modest success with short stories in the past, I figured that my brain's now ugly enough to write a novel – Certainly, I’ve had enough life experiences to fuel a much larger project.

I must add that completing the 2010 NaNoWriMo challenge helped immeasurably. It was a 55,000 word novel titled Heroes of Sol (admittedly it became an unpublishable mess, but an achievement none-the-less. Seriously, writing a novel in a month? Madness!). This proved to be the catalyst that super-charged my energies in the plotting and structuring, and ultimately the writing, of The Shadow Fabric.

There’s no particular book The Shadow Fabric runs parallels with, although I believe it would sit comfortably between novels of witchcraft and the walking dead. My story, although isn’t actually about zombies, takes the dead and their footsteps a little further.

It's too early to tell, but I know I'll first be seeking representation with an agency.


I know this is a lame answer but I couldn’t imagine any actor playing any one of my characters. With the story set in the English countryside though, they’d have to be British.

Two years ago Leo was involved in an accident, but before that he remembers nothing. Starting a job, desperate to begin a new life, he witnesses his boss murder his own brother. As if that isn’t bad enough, the Shadow Fabric takes the body and vanishes with it.

Leo is dragged into a world long since hidden from humankind, while his personal shadows follow him. And so chased by his past, as well as the Fabric, he starts to doubt everything and everyone around him... including himself.

The Shadow Fabric is a novel of sin, shadows, and the reanimated dead. Set in present day, it digs up a previously unknown history of witchcraft and reveals the true cause of the Great Fire of London.

Here are the tags for the other authors in the web ring, as well as their works in progress:


I'll be adding more as they come!