Whether you're in the middle of your fiction project or you've completed several drafts, you may notice there’s something wrong with the characters: they all sound the same. Their dialogue is similarly structured, and you realise each needs an individual voice. Possibly they already have a catchphrase or two, but they require much more.

During your first draft this is tricky to implement while your creative urges are charging forward and your inner-editor tries skipping backwards to characterise the dialogue you've just written. When writing The Shadow Fabric, as is often advised for any first draft, I just got on with it. I wrote it all with my inner-editor's door closed.

One of my follow-up drafts was to tune in to each character's voice; to make sure they didn't sound like me. Because I knew they would – I wrote it. I created them. That was when I thought about colour-coding my character's dialogue segments.

Not only having developed detailed Character Bios (even for the incidental ones) where I'd listed their catchphrases, I decided that colour-coding would be the easiest way to identify who says what and how they say it. Please understand that whilst writing the first draft of my novel, I did not stop mid-flow to change the font colour; I went through it on draft No.4. And yes, throughout the whole manuscript... all 100,000 words of it.

It was time-consuming and quite labourious, but entirely worth the effort. 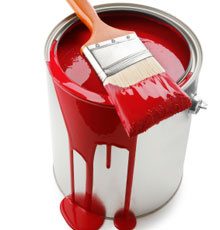 My main character's dialogue was in red, the next blue, then green, etc. This really helped in viewing their speech objectively, and when I printed off a hard copy I could see – at a glance – whose voice was whose. With that, I easily removed the author's voice.

This also aided in getting the punctuation right and making sure there was a balance of gesticulation and scene interaction. Also, you can scan for overused dialogue attributes, and eliminate those neighbouring adverbs which can weaken your otherwise snappy dialogue.

It has certainly sharpened my editing eye, and I know I'll be doing the same for my next novel... when I've finished editing this one. In applying this colour-coding technique, you too can make your subsequent drafts a lot less painful to edit.

Here's an example, taken from The Shadow Fabric:

Goodwin’s door opened, and there he stood. Smoke plumed about his head like a deformed halo.
“How are you?” He waved his cigar into the room.
All morning I’d practiced some kind of speech, to get the story out; to tell Goodwin of Victor’s family visit. Of course, faced with the only family I had, my tongue wouldn’t move. My lips twitched pathetically.
Goodwin’s eyes widened, the cigar halfway to his lips. “What’s up?”
I collapsed into a leather chair.
“You don’t look yourself.” He circled the desk and sank into his chair. It creaked.
The words in my head were as swollen as my tongue. Finally, I managed, “Victor.”
He jerked his head back. “Everything OK with him?”
“Last night,” I sputtered, “we went to see his brother… Stanley’s dead.”
“What happened?” It was the first time I’d heard the man raise his voice. He pushed the stub of cigar into the ashtray and lit another.
“Victor’s fine.” I dragged my hand from forehead to chin, squeezing my jaw. I’d forgotten to shave. “As fine as anyone can be after watching their own brother die. He killed him.”
“How?”
“Victor had a knife and Stanley had some black fabric. It came alive, Goodwin. I’ve never seen anything like it… It moved and took hold of Victor’s hand. It made him kill him.”
Goodwin was nodding, suggesting he actually understood me; he believed every word. I was conscious of pulling my top lip down with my teeth.
“The Shadow Fabric took Stanley away,” I added. “Folded around him and took the body.”
Goodwin’s thoughts wrinkled his forehead.
My fingernails continued to rake the stubble. “Never seen anything like it. Stanley’s body vanished into the shadows!”
“Leo, everything’s going to be OK.”


Your comments are always appreciated, thanks.