Driving around in this October sunlight has reminded me of a short story I wrote back in 2005. It was short-listed in an international competition for the Writers' Forum magazine, narrowly missing one of the top prizes. So, given that the orange glare is making us all squint – that, and the cursed reflection from the wet ground – I thought I'd post it as a blog... Please enjoy. 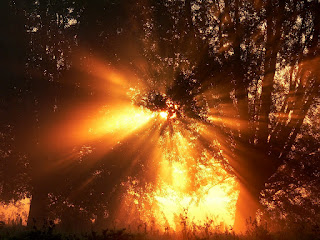 Alfred opened his eyes and for a moment nothing would come into focus. He blinked, anxious, and moaned as his vision gradually sharpened. He inhaled the putrid smell of burnt rubber, and pain pulsed from somewhere inside his head; a cough burst from his throat. The sound of tinkling glass lanced his eardrums, and he tried to move. His seat belt restricted him.

It was then that Alfred remembered: seat belt. Martha hadn’t worn her seat belt.

Martha: still beside him, thank the Lord. Wide-eyed and pretty as ever – her senior years had been so very kind to her. Regardless of not wearing a seat belt she looked fine, if a little confused.

He had told her – had always told her – yet sometimes he just loved her too much to argue. She had never found seat belts comfortable, so she’d not bothered to wear one. More often than not she’d flatly refuse, whilst other times she would go along with it. Indeed, this went back to the mid-70s when a Road Traffic Bill was put forward in the House of Commons; coinciding with Jimmy Saville’s ‘Clunk-Click’ TV commercials which were frequently on the air. He remembered how much fuss she had made when finally it was announced that the seat belt would become compulsory to wear if the car had them fitted.

He recalled how he had shrugged off her comments. Being the law-abiding English gentleman that he was, he would of course wear one. From then on, without a second thought, he found himself clunking and clicking. Wearing the seat belt certainly didn’t harm anyone, least of all himself, and it wasn’t that uncomfortable as Martha made it out to be. Those commercials claimed that wearing one saved lives, and if that was the case then so be it.

A few years ago he read somewhere that on the 20th anniversary of Clunk-Click over 50,000 lives had been saved. He wondered what the tally was now, himself and Martha included in those numbers… Even if today she hadn’t clunk-clicked her own, they would both say she had done so.

The right side of his head ached like hell and his hand came away wet and red after patting his face. The rest of his body, however, felt fine; just a few aches here and there which was certainly nothing unusual. For a good couple of decades now his body woke up to all sorts of mild discomforts; such is the curse of old age. Mind you, for a gentleman of nearly 80 years of age he honestly could not complain. He was much more able-bodied than the majority of his peers and, moreover, his mind remained clear.

Fumbling to his left Alfred released his restraint and shifting to his side he looked at his wife.

“It’s okay,” he whispered, and he took her hand.

It was relatively easy to clamber from the wreckage, and even when they were both clear he didn’t once lose the grip on her hand. He couldn’t. He was too scared, yet oh-so-thankful to be alive.

Martha wasn’t saying much, nor could he blame her. He had been the one driving. He was to blame.

They had been cruising through country lanes at that time of day where the sun was getting low and orange. Martha had been talking about their plans for when they got back home.

“Don’t get me wrong,” she was saying, “I’ve truly enjoyed our weekend, it’s just that I miss having time away from home and I’d like us to book another break away. See a little bit more of the world while we have the chance. Further away and for longer. Not just one week, but maybe two. We need to make the most of these years, Alfred, while we’re still in good health.”

“I know precisely what you mean,” he said. “Maybe we could book something using the internet.”

To that she nodded.

“Now, that is a good idea,” she said. “But we’ll have to get Robert to do it. I’ve no clue and I know for certain that you haven’t either.”

He laughed. “You’re not wrong there.”

“I know we’re in good health but we really aren’t as young as we used to be and there’s not any point in having all that money sitting there in the bank doing nothing except gaining interest. Which, incidentally, we are never going to get round to actually spend.”

“But that money is there for security. Our security as well as Robert’s once we’re gone,” he said, but could see her point. As always.

“I’ve told you before: it’s no use being the richest person in the graveyard.”

He nodded. Again, he could see her reasoning. If only she could see his when it came to wearing that seat belt. Sometimes he annoyed even himself: he doubted that he would ever give up thinking of her safety when she refused to wear that strip of lifesaving fabric. “And anyway, even if we started to spend that money now I doubt that we would get through it all. Unless we had some really expensive holidays, that is. But even so...”

“Hastings was really nice,” she said, smiling. “I’ve very much enjoyed it, and we have been blessed with the weather considering the time of year. I really do miss having time off, away from the house and the garden.”

Now he was walking with her, away from the car wreck and with the sun blinking through the branches of the autumnal canopy overhead. They came to a small stream cut between the looming trees, and without pause they stepped into the water. Immediately the coldness soaked through his shoes to numb his feet. There was hardly any current and they soon cleared it. Mud sucked each footfall, and he stumbled slightly. Martha had no difficulty, yet still she said nothing. Again he caught himself unable to blame her for any ill feelings she may be harbouring towards him. Yet, after all, it was she who hadn't worn the seat belt. He had worn his, as always, and for that he was thankful.

They were both so very fortunate.

Over the last few years Alfred had taken to each day with appreciation. Life was for living; enjoying. It was sad there were those out there whom saw it necessary to end their own lives. What of the driver heading toward the cliff without any intention of braking? Did they, from their house to their final destination, actually bother to wear a seat belt? Were they at such an emotional low that they clicked the belt into place out of simple habit as opposed to an ironic view of their own safety during the oncoming journey? Maybe they wished to avoid any entanglements with the law, and if they considered such things with apparent lucidity then was it not possible to bring themselves out from their most desperate hour?

If only things were as simple as the pleasant stroll he and Martha were taking.

Thinking back to the accident Alfred squeezed tighter on Martha’s hand. Still she said nothing, nor did she return his small sign of affection. Was it that: affection? Guilt, most likely. The sun was low in the sky and spreading its orange glare across the countryside. He had reduced his speed accordingly, yet he should have seen the car. It emerged from a junction ahead without any regard for possible traffic on the main road. Unfortunately Alfred was that traffic, and as such had little time to react as the car pulled out in front of them in a squeal of rubber. He even had time to register the music that was thumping a rapid beat from within the car like some demon soundtrack. The next moments were lost to darkness and now he was walking with Martha. Walking away from that darkness.

It wasn’t that long ago, hours in fact, that he had been doing the very same thing on the edge of the south-east coast, enjoying the small warmth which had come with a strange October. The two of them appreciating both the weather and the other’s company. He was so fortunate to have found someone like Martha, all that time ago during those terrible years of the war. 59 years of marriage to his Martha. He was lucky. They were lucky... Both so lucky to be alive.

From behind them came a commotion. Two police officers were bounding through the trees, twigs snapping and leaves crumpling underfoot.

“Sir,” one of them shouted, “stop right there!”

Having already paused to look over his shoulder, all Alfred could do was let go of Martha’s hand.

One of the policemen had already come to a stand-still a small distance from him, whilst the other staggered to a halt even further away.

There was a pause, and the officer closest to Alfred was about to say something but was cut short by his colleague’s strangled words.

Alfred frowned and wondered what they both stared at. He followed their gazes, looking down at his feet.

A few splashes of blood covered his right shoe, and next to that was Martha’s hand.

“Martha,” he said, “you should’ve worn your seat belt.”