The Philippines: Can there be a Happy Meal for everyone?

What you’re about to read is something which began as scribbles during my visit to the Philippines in 2008. Not long after returning to the UK it became so much more than I realised. 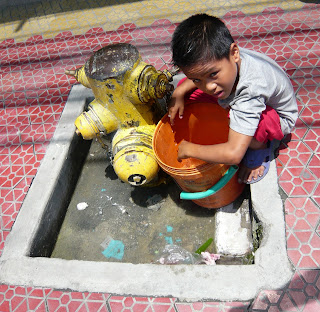 Beneath the cruel heat of a midday sun I watched as a young Filipino child washed his face in the water leaking from a roadside fire-hydrant. Patiently he began collecting the trickle in a bucket almost as large as himself. Any later in the afternoon and this boy’s small form would be shadowed by the looming golden arches of a McDonald’s restaurant. With its proud white walls and polished windows reflecting the sunlight in a callous glare, its flags fluttering in the wind, I asked myself one question: is there a Happy Meal for this boy?

Not just here in the country’s capital of Manila, but across all the major cities and towns of the Philippines, there is the frequent Western mark of those symbolic arches. Like a taunting beacon, the red and yellow buildings stand tall, towering over the derelict and ruin of neighbouring structures. Later, as I sat in my room, its cramped and stuffy confines shared with a cockroach and rising damp, my research led to an apt discovery behind the name of this capital city: musa textilis, a banana-like, broad leafed plant. Native to the Philippines, its fibres are used to make rope, fabrics and paper; commonly known as manila hemp, giving us what we know in our society as manila envelopes. But, enlightening as this was, it was the Latin link which captured my attention: based on the word manicula, meaning manacle. Interestingly enough in West Africa the word manilla is a metal bracelet traditionally used as a medium of exchange, yet here in the Philippines its definitive comparison remains poignant when likening it to the country’s shackled beggars and midnight dwellers.

Between the stunning stretches of miles, every major town reveals hundreds of children manacled to a life of poverty. Aside their pitiful stance before me, proffering dirty palms in that all-too-familiar gesture of the beggar, I saw little similarity with our own children. Viewing them as real people, existing, fending for themselves, and soon I was to witness them sleeping on the streets: naked, wrapped loosely in their mother's arms, whilst cockroaches scurry about their feet.

The nights were foul, where the smells seemed oddly accentuated come dark; chewed up with the stench of sewer and rotting waste, over-spilling bins and puddles curdled with unmentionables.

Taxis (with their crooked drivers, speaking of faulty meters so as to charge the gullible tourist three-times the usual fare), the jeepneys and trucks, the motorcycles and cars, all choking the already polluted atmosphere with tendrils of exhaust fumes; ghostly plumes making their way from the road to shroud the street-sleepers in a poisonous blanket.

There is a Filipino rival to McDonald’s – Jollibee’s – and inside one such restaurant I was amazed to see an armed guard opening the main doors to customers. He was dressed in a blue uniform, his pistol in a holster; its grip worryingly well worn. It was not this that caught my attention – however I did wonder of the need for such a weapon in a fast-food establishment – it was the fact that the guard looked so young. Had he, I mused, used that pistol more than he had a razor?

The display of weapons did not end there, fuelling the overall sense of negativity and near-paranoia, where on numerous occasions when entering shopping malls I found myself metal-scanned and bag-searched. Every security guard sporting a shotgun; again with a worn handle and a silvered barrel, shiny with over-use.

When it was time to leave the city, and to head north-west to the Spanish Colonial town of Vigan, I could not help but breathe a mental sigh to be making my way out of Manila.

During that five-hour journey, the coach made a brief stop at the roadside. I remained on the bus as a troop of children clambered aboard holding baskets of food to sell. Wide-eyed, those children, as they crowded around me; so happy with so much life, wearing their bright coloured t-shirts and equally bright smiles. For a while I entertained them with goofy expressions and they were enthralled, amused; their giggles like cheery music. Making a purchase of something possibly edible squashed into a see-through plastic bag, I handed over a few pesos.

A hint from the bus driver as the engine coughed into life and they soon left, however reluctantly. Their hands waving continuously on the end of enthusiastic arms as we gained speed down the hill. The contrast of the children’s happiness was a vivid polar opposite to the cloak of sadness in Manila.

Once in Vigan, I was greeted with locals proudly doffing cowboy hats, and kalesas (horse-drawn carriages) riding alongside the commonplace 4x4 and the motorbike. Here I found myself breathing both in and out freely, soaking up the quaint display of charms you would almost come to recognise in a 60s Western.

Narrow cobbled streets lined with antiquated houses, their wrought-iron balconies and wooden-beamed frontages a romantic slant surrounding me. The occasional jeepney and traysikel (motorbike and sidecar), cruising past giving each kalesa – and there are so many – a wide berth. Pedestrians carrying goods upon their heads, wearing smiles for this recently arrived tourist, move to and fro between the many shops and restaurants.

Very soon the veneer of pleasantries peeled back to reveal the occasional salivating horse, an unhealthily solemn hang to its head. Street corners and doorways sited beggars, and again those twin arches shone golden; sunlight lancing off that emblem of taunt, standing proud beside collapsing mansions and shut-down museums.

Vigan, it seemed, was not without its problems, yet still they had a McDonald’s serving Happy Meals. 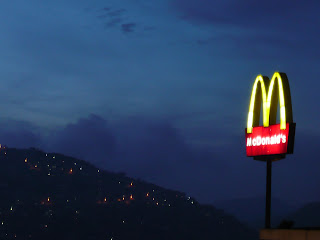