Perhaps the village of Osgathorpe, as if possessing some kind of consciousness, tuned in to my ignorance of its pronunciation and held us tight (in my Southern accent I insisted on calling it Ogglesthorpe). There is, however, another possibility: the local ghost, known as ‘The White Lady’. The area, and in particular a neighbouring ruin, is one of the most haunted locations in Leicestershire – but we didn’t know that at the time. Nor did we know the roads…

At one o’clock in the morning, and with no other cars on the road, my wife and I headed back from my cousin’s wedding – the echoes of Metallica’s Enter Sandman ringing through my head. Off to Never-Neverland indeed.

The weirdness began when we took to cutting through Osgathorpe, this being the supposedly direct route into Thringstone and on to Whitwick where my Grandparents live (and where our cosy bed lay). However, failing to find the A512, we somehow circled the village of Osgathorpe, and came back down a familiar road, running parallel with a stone wall. It was as if someone had picked up the car and pointed us in the other direction.

Puzzled, we pulled over and checked my granddad’s map: our situation didn’t make much sense, we’d been heading the right direction. So, off we went again… and again, after a few minutes, there we were, back along the very same road; the very same wall next to us.  Again and again, zig-zagging and looping the village; back once more to that road. That wall.  Even after another couple of stops – lights on and map-scrutiny – we kept returning to the same stone wall on the edge of a junction, that same road stretching out before us.

I’ve always taken pride in my map-reading abilities, and certainly never been one for sat-nav (having heard all sorts of negative things about the ridiculous routes they take you), but this was the only time I thought maybe they weren’t such a bad thing. Perhaps where the White Lady hovers on the threshold between our world and the next, such malevolence would toy with technology and still have us going round and round and round and…

As if the darkness teased us with a glimpse, there we saw the ruins of Grace Dieu Priory. A sleek shadow on the edge of Cademan Wood, the structure offered up a pale haze in the darkness… and there was our road. The A512, finally… after almost half an hour’s search.

It was lucky we were both laughing at the situation – fear didn’t come into it. Certainly not at the time, as it wasn’t until the morning and speaking with my aunty that we learnt of the White Lady.

Sadly there seems to be little history behind this apparition, only that she is known to drift across the A512. Famously reported in 1954 by a bus driver, who said he’d stopped to pick up a woman waiting in the shelter opposite the ruins. As his doors opened she was no longer there. The last actual sighting was by a police officer in 1961.

I’ve always had the saying ‘Seeing is believing’, and neither of us actually saw anything and, quite honestly, who knows? Was it the White Lady, casting a veil of darkness over our only exit in an attempt to keep us in the village? Had we not found our route, would she have managed to ensnare us metaphysically, restraining us with other-worldly shackles?

Or was it us, riding on the joys of a fine day, not focusing on the journey and simply being idiots? 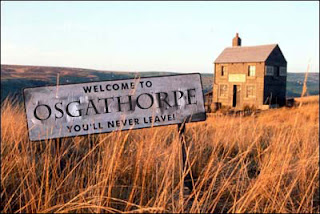