Ending the day in explosions and gunfire

Has your day ever begun with a deer and its fawn running in front of your car, only to end with a 72 year-old Chuck Norris emerging from a smoky street lined with burning cars?


Yesterday, mine did. There was of course a great deal of time passing between both events (and more beyond that particular Chuck moment), but that's my life... I live in the country, surrounded by fields, deer and many winged toys for our cat (not that he ever catches any). Here we're so remote, our broadband drags its heels like the snails on the doorstep, and no one ever seems to want to attach a gas main to our cottage.

Chuck Norris, I will add here, paid me a visit to silence my Rice Krispies. No, that's a lie, but he could do just that. What I should say is that I went to see him. Him and his chums: Sylvester Stallone, Bruce Willis, Jean Claude Van Damme.  Oh, and Arnie – for his long-awaited return into acting (his last starring role was in 2003 for the third installment in the Terminator franchise, Rise of the Machines). I watched The Expendables 2 last night, if you hadn't already guessed. It's the type of movie you go into without any expectations other than brainless entertainment, of muscles and machine guns, of crap one-liners. We sit down to doff our hats to a whole host of heroes from the 80s. 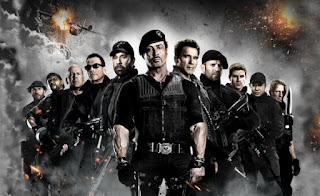 Schwarzenegger's back; older, wiser, and he keeps his shirt on. Half a decade older than my Dad, at 65 Arnie proves his trigger-finger is at least exercising again. I am certainly looking forward to The Last Stand (check out the trailer), The Tomb (with Stallone), and then eventually Triplets.

Triplets, yes. Arnie and Danny DeVito return, and this time the pair team up with Eddie Murphy. (Twins was released in 1988 – are you feeling old yet, or is it just me?)

Being my first blog I want to keep it relatively short, and I'll tell you that my next one shall begin a descent into the supernatural... indeed, just on the edge of our perception, beneath and between the spaces around us.

In keeping with the theme of today's blog, I’m leaving you guys with a fact about Norris:

When Chuck Norris does a push-up, he isn't pushing himself up
– he is pushing the Earth down.

Remember that, if nothing else.